The backdrop for the fall of 2021 was the global energy crisis, which began to smoothly turn into a general economic and financial crisis. The crisis is spreading like wildfire from one energy market to another. The economic recovery that began quickly after the Corona virus faltered in its global centers due to energy.

China is already warning that the food security of the global community may suffer as rising prices for non-renewable resources – gas, oil and coal – affect the production and supply of fertilizers.

The peculiarity of the recent global energy crisis is that this crisis, according to Bloomberg, is the first ever green energy crisis. This is a transitional crisis. A large and complex system is becoming more fragile as it undergoes fundamental changes. Several operations went wrong at the same time. Based on the first experience, experts predict that in the next few decades of energy “transformation” there will be more economic downturns due to energy problems – its consumption, fuel shortages and, as a consequence, a slowdown in economic growth due to supply vulnerabilities. The power transmission will not be smooth and it will feel like driving over bumps.

In recent decades, the world’s leading countries have sought to increase the use of renewable energy sources, but the industrial economy is still largely dependent on fossil fuels – coal, oil and gas. This is a dialectical contradiction. The irony of the fate of the fall of 2021 was that the “energy transition crisis” struck on the eve of a milestone for the new president of the United States Joe Biden Events – The UN Climate Summit in Glasgow (Scotland) later this month. What will be discussed is not the future heights of progress, but the upcoming peak of the current energy crisis this winter and its consequences.

The EU summit scheduled for next week will take place against the backdrop of sharp disagreements within the EU over the response to the crisis. Leaders of member states view the EU in two ways: as a scapegoat or as a potential saviour. Some heads of state and government are demanding a common standard solution. Others blame Brussels’ drastic emissions cuts for the current energy “transition crisis”. Energy analysts argue that Europe moved away from fossil fuel energy too quickly before providing enough renewable energy to fill the gap in the event of an emergency.

In addition, solar and wind generation have not made up for the loss of nuclear power in Europe. Europe fell into a crisis, halfway through the transformation that Europeans had planned to complete for decades.

The cause of the crisis is the continuous and unbalanced expansion of the use of renewable energy sources. But the growth of green energy in the world takes place mainly in the so-called “rich” centers. billion gold. Here is a specific example. In 2020, wind generated 25% of the UK’s electricity. In the summer of 2021, the UK set a record two months without using coal in the energy sector. 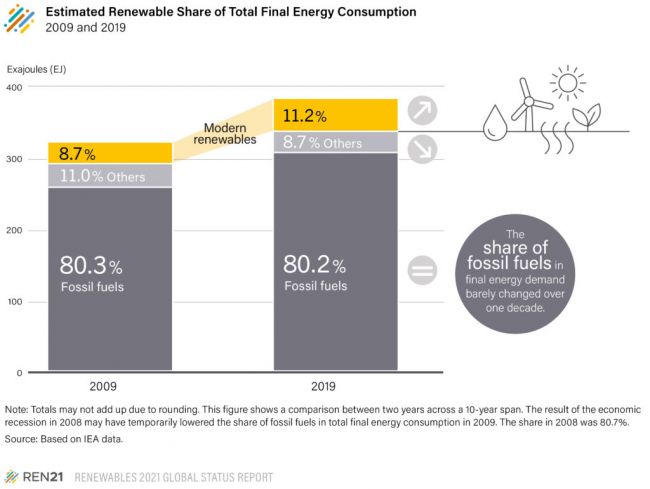 At the same time, the share of modern renewable sources (such as wind generators and solar panels) was 8.7% in 2009. The remaining 11%, which are renewable, is, relatively speaking, “wood from the forest” for conventional heating and cooking. In 2019, this percentage was 11.2% and 8.7%, respectively. Thus, the relative growth of green energy over the decade was 2.5%. At the same time, the increase in green energy was carried out by reducing “firewood” by 2.5%. These two and a half percent figures are indicative of the progress of industrial human civilization over the past decade. In 2018, wind energy accounted for 5% of global electricity and solar energy accounted for 2%. As a percentage of the world’s total energy consumption, these are 2 and 1%, respectively.

Thus, the “green shift” on the planet cannot be geographically uniform. Other large areas will become more dependent on fossil fuels, reducing the overall green balance on Earth. The continued economic growth and population growth in the world will also contribute to the growth of energy consumption.

One of the main causes of the current global energy crisis is the decline in investment in fossil fuels in the name of green energy. New investment by US and European oil companies in oil and gas development fell by more than half between 2015 and 2021, according to Rystad Energy. In such a case with capital investments, decarbonization may be associated with a 73% reduction in oil production by 2050 in the absence of alternatives created in the balance sheet. 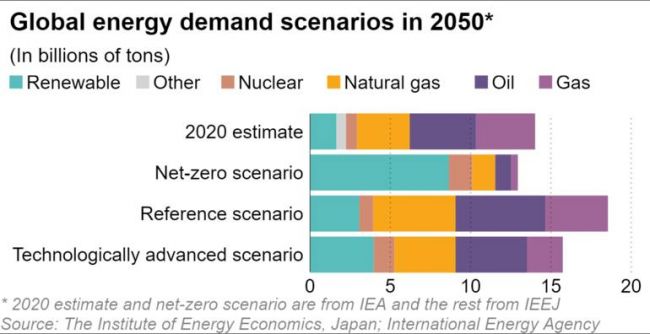 However, many experts criticize this ideal, noting that the IEA’s forecasts are just theorizing. Senior Economist at the Institute of Energy Economics of Japan Yoshikazu Kobayashi It is believed that the demand for fossil fuels is not likely to decline much in 2050.

The institute has developed two scenarios for global energy demand.

The “standard scenario,” which assumes a continuation of past trends, projects that demand for fossil fuel energy in rich nations will fall by 11% by 2050 compared to current levels. But at the same time, the demand for fossil fuels will grow by more than 50% in emerging economies. As a result, by 2050 global oil demand will grow by 36% and natural gas demand by 57% compared to 2020 levels.

Another “progress scenario” that assumes advances in green energy technologies is that energy demand will rise – an increase of 8% for oil and 16% for natural gas. The institute is of the opinion that in developing countries, the demand for oil for use as gasoline and natural gas as an industrial fuel will remain high.

The current crisis has shown that as the world moves away from nuclear and fossil fuels, there will be a growing demand for flexible energy sources, such as natural gas, that can respond to the peaks and troughs of renewable energy.

The declared shift economy to green renewable energy has had to switch to fossil natural gas in order to keep operating. This makes natural gas not only an important resource but also an expensive one. Gas prices in Europe have increased since the beginning of the year, especially in the spot market – by 400%, while electricity prices have increased by 250%. But such a high price hike has exposed, along the way, the current shortcomings of the market exchange system with regard to energy.

At the current pace of the decarbonization program, the supply of fossil fuels may not keep pace with the demand. In this regard, energy experts point out that the rich fossil energy producers in the Middle East are aware of this opportunity and are keen to take advantage of it. In August this year, on the eve of the outbreak of the crisis, Saudi Aramco CEO Amin Nasser He said the Saudi state oil company is working hard to expand its production capacity.

“We see very little investment in oil production, and this is a great opportunity for us,” he said.

Regarding these prospects, warnings were heard from the expert community of the American Atlantic Council that if the United States continues to reduce investment in oil production, it will soon have the only opportunity to purchase oil from several countries, such as the United Arab Emirates, Saudi Arabia and Russia. It would not only be a political threat, but also an economic one.

If a region becomes the main source of supply, the risk of a repeat of the oil shocks of the 1970s will also increase.

In conclusion, some general statements about green energy. Green energy is generated from natural sources such as sunlight, wind, rain, tides, river flow, plants, algae, geothermal heat, etc. These are renewable energy resources because they are naturally replenished in nature. The main objective is to reduce the negative impact on the environment. The green energy ideology was first formalized into actionable standard programs in November 2006 – the 20-year RESOP (Renewable Energy Standard Supply Program) program was launched in the Canadian province of Ontario. In 2009, Ontario passed the Energy and Green Economy Act.

At the same time, most of the energy used in the world today comes from non-renewable sources, the main ones being coal, oil, natural gas and nuclear power. These energy sources cannot be restored in a short period of time. The advantage of non-renewable energy sources is that they are relatively cheap and easy to use. The main drawback is that they are exhaustible. In addition, they seriously affect the environment and human health and are believed to be largely responsible for climate change and global warming.

Supporters of green energy point out its main advantage: the average cost of clean energy technologies is assumed to be lower than that of fossil fuels. After all, the marginal cost of wind and solar is almost zero. Therefore, capital for renewable energy projects mostly comes up front, while the cost of each unit of energy is essentially free.

However, green energy has the following disadvantages:

– high cost of generation;
– high transportation costs;
– Lack of continuity in generating solar and wind energy, provided that the electrical networks are balanced.
– low efficiency of installations, with the exception of hydroelectric power;
– high cost of maintenance and control;
The problem of maintaining electrical networks and backup stores.
– the problem of seasonal storage;
– the problem of recycling wind turbines, solar panels and batteries;
– the impossibility of replacing non-renewable energy sources in many of the current basic technological processes of civilization; For example, it is not possible to produce steel, fertilizers and plastics on an industrial scale without using non-renewable carbon-based resources.